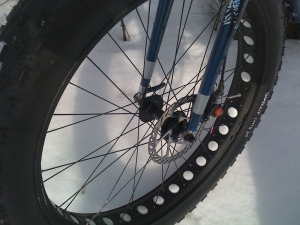 Welcome to the Fatbike Library!

If you’re looking for information about snowbikes and fatbikes, you’ve found the right place.

Until now, it’s taken a fair amount of searching via Google, Yahoo, or Bing to find all the info you want about fatbikes, organized in a single place.  RideFatbikes has launched (9/26/11) what we believe to be the first ever Fatbike library.

Please follow @RideFatbikes and tweet about the Fatbike Library to your followers.  The fatbike library can be found at FatbikeLibrary.com, and the more everyone can contribute to it, the more useful this will be to other fatbike enthusiasts like yourself.  Please contribute ideas or resources you’d like to see in the fatbike library, or contact us if you’d like to sponsor this page.  Broad areas of interest covered in the Fatbike Library include:

Surly (home of the Pugsley and recently released Moonlander)

Salsa (the Mukluk, Mukluk Ti and other fine fatbikes can be easily purchased or equipped, thanks to the design and production efforts of Salsa)

9 Zero 7 (aluminum and titanium fatbikes from Alaska; titanium frame has a lifetime warranty)

Fatback Bikes (one of the original fatbike manufacturers from Alaska, with one of the first frames designed for 170mm symmetrical build rear hub/wheel)

Schlick Cycles (I’m not very familiar with this company, but they have a fatbike called the Northpaw, and they’re located in WI, so they’re worth keeping an eye on)

Carver Snow Bike (Snow bikes in Maine? Why not. These guys are building some cool stuff in ti, including a nice set of ti handlebars I think look great; their snow bike in ti also looks like it might be a great value)

One On One Bike (Minneapolis, MN)

Fatbike in the City

The Fatbike Thread on BikeJournal